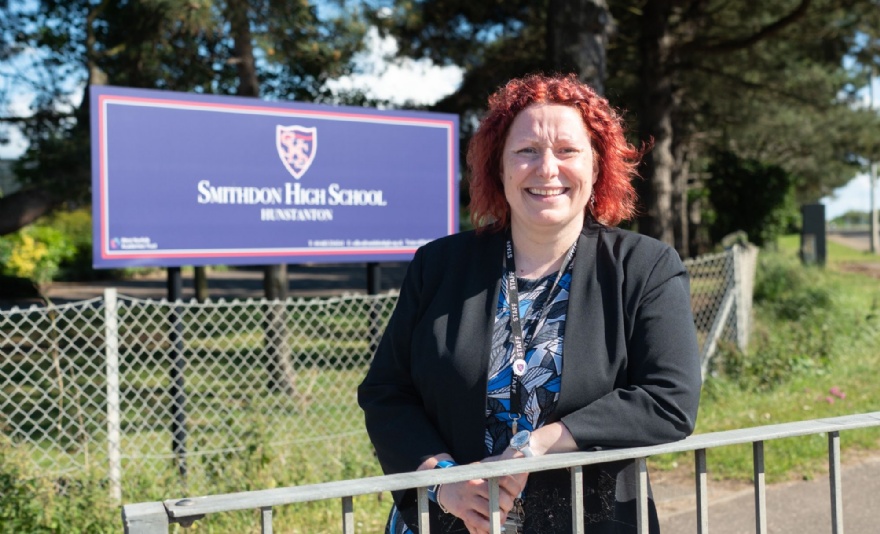 Reconnecting links outside the immediate school community in the wake of the pandemic is one of the priorities for the new headteacher of our school.

Amanda Gibbins takes the helm from September, and is looking forward to forging partnerships with the local community and businesses to create a two-way street of learning and support.

“I am excited to be taking on my new role and all that comes with it. I feel privileged to be able to continue the developments of the school,” she said.

“Over the last three years, especially under the leadership of John Hirst, the school has made progress and continued to improve what we offer to our students in spite of the difficulties of the pandemic, the lockdowns and the subsequent restrictions,” added Mrs Gibbins, who is from King’s Lynn originally and has been our Head of School since 2019.

During the past year we have extended our  range of co-curriculur activities in a huge variety of sports, music opportunities, creative projects and subject-specific clubs. We have also increased our GCSE offer to reflect the local employment base, with the introduction of Hospitality and Catering along with Business Studies.

“For me, the removal of the restrictions will allow us to reignite the links outside of our close school community and to extend back into partnerships with our local community and businesses who have so much to offer our students for future career development and aspirations. We can reciprocate with community support from our students, which can now extend beyond our work with the local foodbank and other local charities in recent years,” said Mrs Gibbins.

She takes over from Mr Hirst who is retiring at the end of term after three years with the school. He is also a former headteacher at St Clement’s High School and a deputy head at Springwood High School - all members of the WNAT.

Originally from Manchester, Mr Hirst started his career as a history teacher, spending ten years on the Isle of Wight,  and has spearheaded improvements at Smithdon during the difficult period of the pandemic.

“I am incredibly proud of the achievements the school has made, the opportunities created and the life chances precured for pupils. I have enjoyed working with staff, parents and pupils and a highlight has been securing the School Rebuilding Project, a significant investment in both the school and the community. I will always look fondly on my time at Smithdon and wish the pupils, staff and leadership team all the success they deserve. I am also looking forward to enjoying a lie-in!” he said.

Having left Norfolk to pursue her teaching career in Reading and Surrey, Mrs Gibbins returned to the county in 2005 to teach in East Dereham where she stayed at Northgate High for nine years.

A move to Head of Faculty at Fakenham Academy followed and Mrs Gibbins was there for four years before joining us in September 2018, becoming Head of School a year later.

“At 13, having discovered I couldn’t be a pilot in the military due to a back injury sustained when young, I was inspired by my teachers to become a teacher myself and never wavered from that ambition,” she said.

Last year the government revealed we were one of 500 schools to receive a major investment programme into rebuilding to add new, energy-efficient buildings for our 67-year-old school. It previously underwent a £1m revamp in 2020 which saw the food technology area, two classrooms, two ICT suites and two art rooms given a complete makeover.

Its eye-catching brutalist design was the result of a national competition won by married couple Alison and Peter Smithson as one of their first buildings, and it now has Grade II Listed status. Despite the closeness of their name, the school isn’t named after the architects, but is named after the old Smithdon Hundred - a former administrative region.